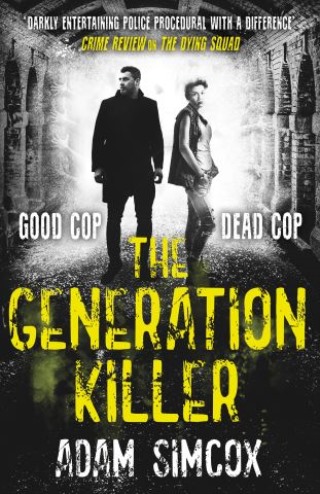 There's a new serial killer on the streets of Manchester - and only a dead cop can stop them.

Detective Joe Lazarus works for the Dying Squad, solving crimes the living police can't. When the Generation Killer starts wiping out Manchester's innocents, Joe and his new partner Bits have mere hours to catch the murderer. A young woman's life depends on it.

Joe's former partner Daisy-May has her own problems. Children are going missing in the afterlife, and she's the only one who seems to care. Her investigation uncovers a conspiracy so vast, it threatens both the living and the dead.

Her predecessor the Duchess can't help this time; she's tracked her treacherous sister, Hanna, to Tokyo, where she's been recruiting the dead. The Duchess must enlist the help of a local detective if she's to have any choice of stopping her.


Time is running out for the Dying Squad. And if they can't crack their cases, it's the living that will pay...

Adam Simcox: Adam is a London-based filmmaker who's shot commercials for brands such as McLaren, Primark and Vice, and music videos for Britpop veterans as well as fresh on the scene alt-country stars. He began his film career by writing and directing three features: the first sold to Netflix; the second and third won awards and critical acclaim at festivals worldwide. A graduate of the Curtis Brown Creative novel writing course, The Generation Killer is Adam's second novel in The Dying Squad series.