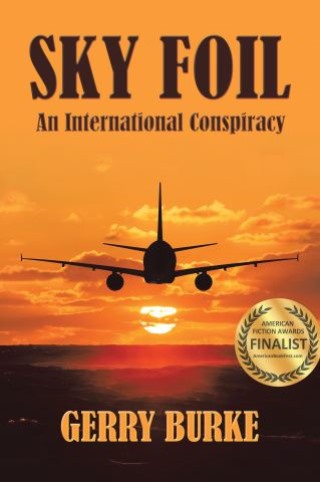 “In recent times, we’ve received many veiled threats; but this one has legs.” —Dave Mackrell:MI5 This one, Fatima Khan, manages to retard the efforts of the CIA, and confuse the combined resources of MI5 and MI6. There’s an international conspiracy in play but the secret can’t get out; or can it? The aviation industry is in turmoil, and the U.S. president is off his game. He just shanked his drive into a water hazard on the fourth hole. How many heroes can you fit into one story? Defined by their individual talents, they serve it up to the villains in this contemporary thriller, involving murder, espionage, and perfidious political power-plays. Fast-paced, fascinating, and imaginative…Readers’ Favorite The shameless spy novel you didn’t know you were missing…Indies Today

Gerry Burke: Gerry Burke received a Jesuit inspired education at Xavier College in Melbourne, Australia, where he still lives. Before commencing his long career in advertising, he was employed by an international mining company, which included a three year stint in New Guinea. He also dabbled in the horse-racing industry, as an owner and breeder, with some success. Being a former accountant and advertising creative, no one expected Gerry to become a published author, but he embraced this initiative in order to stave off dementia. He has since penned 6 novels, 6 volumes of short stories, and 2 offerings of commentary and opinion relating to Politics, Entertainment, Sport, and Travel. The PEST pseudonym was subjected to a sea change with the introduction of his popular protagonist Paddy Pest to booklovers everywhere. Most people see the garrulous gumshoe from Down Under as a cross between James Bond and Maxwell Smart, and he has been the centre-point of the author’s humour-laden resume. In recent times, there have been diversions into Science Fiction and absolute fiction, all of which have won enthusiastic acclaim. Mr. Burke’s credentials have been well established with ten of his books featuring as a winner or finalist in a variety of international literary competitions. His last three volumes have received multiple citations. Gerry is single and lives with photographs of his best racehorses. http://gerryburke.net